Several eyewitnesses at Santa’s Pub are reporting that a young woman identified only as “Julie”, who was called by the DJ for her turn on the karaoke stage only seconds ago, is apparently bringing a group of five friends with her to the microphone.  People on the scene also indicate that Julie appears to be delegating vocal parts to the various members of her retinue as they make their way to the performance area.

“Oh shit, no.  This can only mean another rendition of ‘We Are Family’.  Just get me out of here, for the love of God” read one tweet from @musiccityswagger.  Another tweet from eyewitness @stillundiscovered posted a hastily-made meme-image featuring “Futurama” character Fry and the words “Not sure if a bunch of Belmont students about to show off or another damn bachelorette party about to embarrass themselves”; @stillundiscovered supplemented their meme with “#santapocalypse #drunkaraoke #portmanteumanyhashtags.”  Facebook user Willem Sanders, meanwhile, posted the status “I really hope they break out in Association-style harmonies, but my money says this is just about moral support for someone who can’t even carry a tune in a bucket when they’re sober.  The bright side is that we’ll be through the worst of it in about three minutes.  Time for a smoke break outside.” 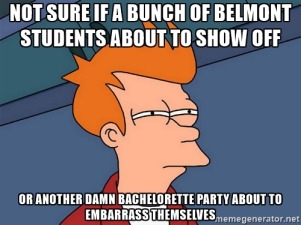 The Rhinestone will continue to update on this ongoing situation as it develops.

UPDATE: There are multiple confirmed eyewitness reports that the Julie delegation “have about as much sense of timing and harmony as you’d expect to find in your average pack of feral cats,” and that they are drunkenly laughing throughout.
UPDATE: Twitter user @VandyZull reports “G*****n it, they’re singing ‘Redneck Woman’.  FML.”