Having already worked with a seemingly endless list of diverse musical talents, entertainer Jack White announced today his intention to begin collaborating on an album with children’s recording artist Raffi. 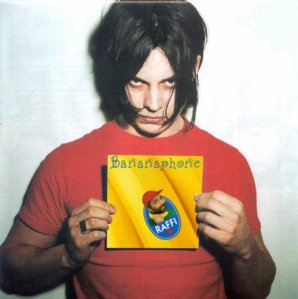 “I think he’s really been undersold as a musical icon” said White of Raffi during a press conference at White’s Third Man Records shop.  “Music is an important part of human development, and I don’t think Raffi gets enough credit for how modern culture was shaped by today’s adults listening to his music when they were yesterday’s children.  We owe a lot of where we are today to the messages of self-actualization contained in ‘Bananaphone’.”

White, while a popular singer/musician in his own right, is well-known for his long history of collaborating with a diverse pool of other entertainers.  Acting as the music-world’s own Kevin Bacon, White has worked with an eclectic list of cultural icons including Lorretta Lynn, Wanda Jackson, Stephen Colbert, The Edge, JEFF the Brotherhood, Jimmy Page, Jerry Lee Lewis, Conan O’Brien, Danger Mouse, RZA, and the Insane Clown Posse; even one of White’s own two current bands, the Dead Weather, is a collaboration with Alison Mosshart of The Kills.

“What it kind of boils down to is I’d started to worry that maybe I’d finally worked with every musician there is, and I might have to start working with people a second time” noted White during the press conference.  “The reason I’m putting out a solo record is that someone said I was the only person I hadn’t done a record with yet, so that’s where ‘Blunderbuss’ came from.  But then one day during a mixing session, someone remembered I hadn’t done anything with Raffi yet; I realized they were right and thought ‘Hey, why not?'”

During the press conference, held to promote “Blunderbuss” which will be available in stores later this month, White assured his fans that the future collaboration would be a fascinating blend, sure to delight die-hard fans of both artists.

“There’s a lot of material to be mined from [Raffi’s] existing catalogue; the discussions we’ve been having about rerecording ‘Beluga Bay’ with a very dark, somber feeling to it have me really excited.  But Raffi’s got so much more to offer than just his own work; I’d really love to have him cover some tunes by Lead Belly or Muddy Waters.  He played Howlin’ Wolf’s Smokestack Lightning for me the other day, just him and his guitar and, man, it was just revelatory.”

Seemingly in response to White’s announcement, Rick Rubin has also declared that he is moving-up the release date for his previously-announced album with Sharon, Lois, & Bram, entitled “Skinamarink-a-dink Recordings IV”.