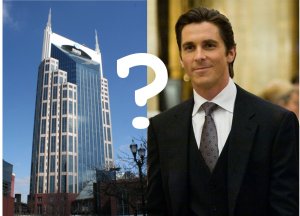 Nashvillians are in shock today after learning that the “Batman Building”, a long-time staple of the downtown skyline, is in fact none-other than billionaire playboy and philanthropist Bruce Wayne.

The Bat Building (also commonly known as “Bat-South” or “[B]AT&T”) has been a towering, foreboding presence in downtown for nearly two decades; located north of Broadway at 333 Commerce St, Bat-Building has kept vigil over the tourist district, SoBro, the State Capitol, and the Gulch with an unflinching gaze since sightings of the vigilante-structure were first reported in August of 1994.  Though some have speculated that Bat-Building is actually a home to corporate entities such as AT&T and Nissan, it was revealed today that the building is actually industrialist Bruce Wayne in disguise.  The shocking announcement was made in a press conference by Metro Police, who claim to have reached this conclusion after an extensive ten-year undercover investigation.

“It has taken the collective efforts of every branch of our police force to unmask the identity of this building” said Metro Police representative Jonas Milkwood in a prepared statement.  “This is the culmination of years of hard work by countless investigators, informants, and community interaction.  I’m proud to know that Metro’s force has, in fact, the World’s Greatest Detectives.”  Milkwood later went on to declare that the local police do not intend to prosecute Mr. Wayne, as he has (as yet) not broken any laws.  More to the point, if it is to be believed that Wayne is truly the secret identity of the 33-story building, then it would be difficult to prove that he has done little more than stand in place for almost 18 years.  “Mr. Wayne, it is the considered opinion of the Police Commissioner, Mayor Dean, and Governor Haslam that your actions are not in any way in conflict with the interests of Nashville, and we are proud to have you, masked or unmasked, watching over and towering above our great city.”

Bruce Wayne, a billionaire supposedly residing in Gotham City, is the CEO of internationally-famous Wayne Industries.  More famous for his lavish, often outrageous behavior, Wayne has been a media darling, making the cover of tabloids and respected business journals alike, since he assumed the chairmanship of his family business at the age of 26.  Though Wayne himself was conspicuously unavailable for comment, Wayne Industries’ spokesman Lucius Fox responded that the claims by Metro Police were utterly baseless.  “Mr. Wayne has given of himself to the people of Gotham, and the people of the world, with the utmost diligence and selflessness.  However, to think that the Bat-Building’s secret identity would be Bruce is sheer foolishness; Mr. Wayne is a businessman and a philanthropist, not a masked super-structure.  Moreover, Mr. Wayne lives in Gotham, not Nashville.  Furthermore, they don’t even resemble one another, and couldn’t even be remotely mistaken for each other, not even on a very dark night.”  Mr. Fox declined to comment on the current whereabouts of Bruce Wayne.

Local residents met the disclosure with mixed feelings.  Laurie Langston, an accountant from Madison, noted that she’d “always felt that the Bat-Building was really just a man, and not some supernatural avenger of a skyscraper the way the urban legends say.”  TDOT employee Harold Brixman had another theory entirely: “I never bought into the whole Bat-Building legends to begin with.  I know what it really is, and one day, we’ll all look up to see the Eye of Sauron up there between them big points.  Then, we’re all screwed.”