In what is being called “a crusade to save the lives of millions of Tennesseans,” Governor Haslam officially kicked-off a statewide educational campaign called “Just Say No To Driving.”

“The ‘War on Driving’ is long past-due for Tennessee” explained the Governor at a press conference this morning.  “People get started driving thinking ‘I can handle this.  I’m in control’, but statistics clearly show that driving is deadly, addictive, and one of the leading causes of death in the VolunteerState.  Not a day goes by that I don’t see the death-toll rising.  We can all see it.  It’s lit-up on a sign over I-440.” 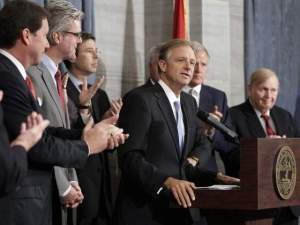 The proposed campaign will reportedly consist of two primary components: rehabilitation programs for those who have already experimented with or become hooked on driving, and preventative educational programs for school children.  Governor Haslam was joined on-stage at the press conference by the educational program’s two mascots: Walker the Pedestrian and Buster the Bus.  Buster, an anthropomorphic MTA public transit unit, and Walker, a guy in his mid-twenties with red Chuck Taylor sneakers and a backpack, will teach kids about the dangers of driving on Tennessee’s roads; in-school assemblies are scheduled to begin in Davidson, Hamilton, Knox, Rutherford, and Shelby counties next week.  Meanwhile, rehabilitation programs will begin in January for those who have already been affected by the devastating effects of driving in Tennessee.

“Awareness is crucial” noted Melissa Weatherby, Chairman of the Just Say No campaign.  “Driving can lead to so many problems besides just death.  Life-altering injuries, high-blood pressure, and Antioch are just some of the horrible things people experience when you get ‘on the road.’  Our mission here is to help people get ‘off the road,’ and keep them off it.  This isn’t some third-world country problem; every day, I hear about some horrible car crash right here in Nashville, and I always think how easily it could have been avoided if some simpleton hadn’t managed to find their way behind a steering wheel.  Everyone thinks ‘I’m not like the others.  I can handle driving,’ and the facts just don’t support that notion.  The sad truth is that most of the people on Tennessee’s roads should never be allowed anywhere near a car.  It’s just an incontrovertible fact.”

At press time, Governor Haslam’s office had no response to rumors of the National Guard mobilizing for an all-out assault and seizure of the multiple TDOT compounds headquartered throughout the state, citing state security.  A source within the Governor’s office, speaking on condition of anonymity, would only note “TDOT will go down, and probably sooner rather than later, but I think [Haslam’s] first priority is the auto dealers.  If you get the dealers first, then you’ve already hurt TDOT where they live.”