Meteorologists from all four local network-affiliate stations have confirmed a warning from the National Weather Service that, between the hours of 11pm and 3am, it will rain pretty fucking hard in at least 19 Tennessee counties. 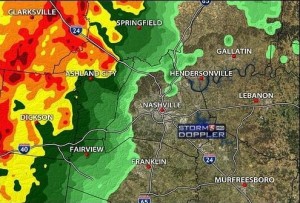 “That is one big-ass storm front coming in” noted WKRN’s Davis Nolan, head meteorologist for the local ABC station during a newscast following tonight’s episode of the new drama “Nashville.”  His assertion was confirmed by WTVF’s Chief Meteorologist Ron Howes, who told viewers “It’ll be coming down like cats and dogs, so be sure your car windows are rolled up because shit’s about to get real.”

Lisa Spencer, chief meteorologist for NBC Affiliate WSMV Channel 4, explained that storms like this cause concern on several levels beyond just the weather itself.  “As forecasters, we have to take care to present this information to the public carefully.  It’s important that our viewers be made aware as early as possible, but at the same time, you don’t want to cause a panic.  Nashvillians tend to be very skittish whenever it comes to even slightly inclement weather, so when we see such a massive storm event as this one moving our way, you just know that bitches be trippin’.”

Fox Affiliate WZTV’s Barak Shapiro says he couldn’t agree more.  “Nashvillians freak the hell out when it comes to weather.  We’ll be all ‘Hey, it’s gonna rain a little’ and they’re all like ‘G*****n, I better run to Kroger and buy five weeks worth of bread and milk and shit’.  It’s crazy, ya’ know?”

Despite fears of public overreaction, WTVF’s Lelan Statom says that the ferocity of tonight’s storm shouldn’t be undersold or played-down too much.  “We need to be professionals when telling our viewers that this thing is serious business.  It’s important to keep our eye on the ball.  For that reason, we’ve made it very plain to Charlie Neese that he can’t draw another penis on the weather map again.  We have to save that sort of stuff for sweeps week, when it counts.” 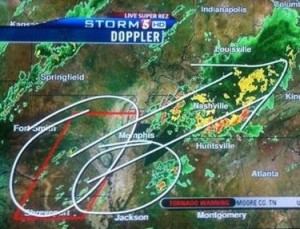 The Nashville Weather Penis of 2010, drawn on-air on WTVF